Something new for the people of Saudi Arabia

Qiddiya will be the capital of Entertainment, Sports and the Arts in Saudi Arabia, an integrated destination offering immersive experiences and memorable moments of delight.

Qiddiya is being built around five cornerstones: Parks & Attractions, Sports & Wellness, Motion & Mobility, Arts & Culture and Nature & Environment. Our cornerstones are supported by our Real Estate & Community Services unit, which will create a thriving community with 5,000 residences.

In short, Qiddiya will be an inspiring place for a youthful Saudi society to fulfill ambitions; a place where they can enjoy, appreciate, aspire, advance and nurture their potential and stimulate interest in new professional pathways that help build a stronger future.

Opportunities to grow alongside a youthful society

On May 10, 2018, our organisation was incorporated as Qiddiya Investment Company (QIC), a closed, joint-stock company. Presently, the Public Investment Fund (PIF) of Saudi Arabia is the 100% shareholder of the company. In time, our corporate structure will evolve to also encompass the Qiddiya Foundation, Qiddiya Development Company LLC and Qiddiya Operating Company LLC.

Our effort is shining a new light on Saudi Arabia, and it has received media attention from news outlets around the world, including CNN, Time, Variety, The Guardian, The Wall Street Journal and many more.

Drawn from an authentic Saudi heritage, Qiddiya creates a new future for Riyadh

On the doorstep of Riyadh, the story of Qiddiya goes back centuries.

Long ago, the village of Qiddiya lay along one of the trade and pilgrimage routes that crisscrossed the Arabian Peninsula.

As part of Vision 2030, His Royal Highness Mohammed bin Salman, Crown Prince, Deputy Prime Minister and Chairman of the Council of Economic and Development Affairs and of the Qiddiya Board of Directors, announced the Qiddiya project on April 7, 2017.

Breaking ground in the Kingdom—and history 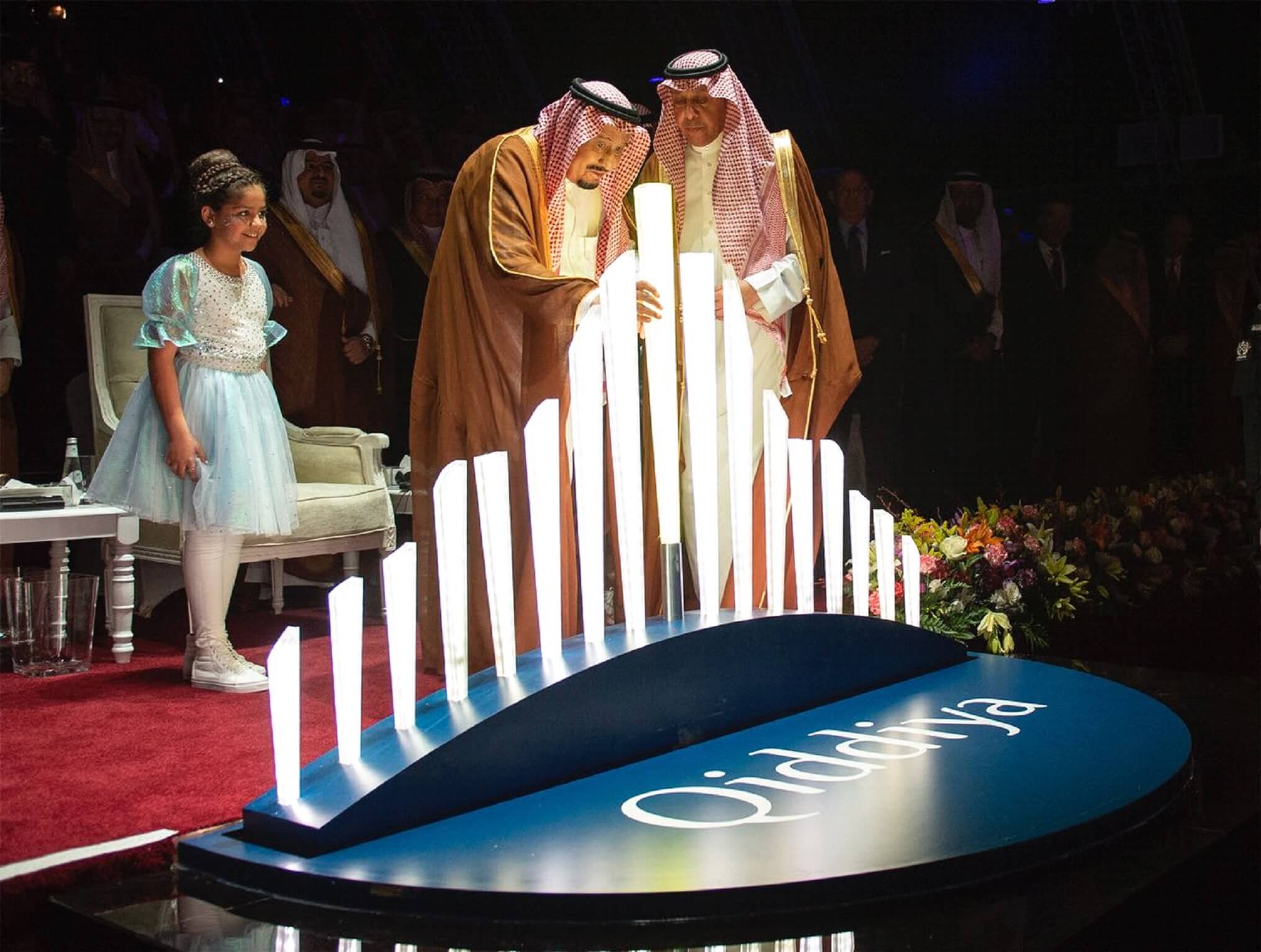 After the national anthem and opening address, Ayed Yousef, a rising Saudi star, performed a song with lyrics written by HRH Prince Bader bin Abdulmohsen, highlighting the opportunity that Qiddiya will present to develop the abilities of talented young Saudis.

The ceremony included a three-act show that took the audience on a journey through time, examining Saudi Arabia’s past, present and future growth. The first act began with a story about an elderly man’s memories of Saudi Arabia as he reflected on what life was like for him as the country developed. It then moved to his thoughts on the present day and to the future, as the Kingdom realizes its potential and works to realize the goals of Vision 2030.

The second act featured a video focusing on the attractions that visitors will find at Qiddiya. The final act came to a close as King Salman placed the last baton into the Qiddiya logo, triggering a spectacular firework show that lit up the sky, dramatically illuminating the Tuwaiq Mountain cliffs overlooking the site. Qiddiya’s first phase of development is advancing towards an early 2023 Grand Opening. Highlights in 2019 included the reveal of our Master Plan, the start of construction and the opening of our Visitor Experience Center.